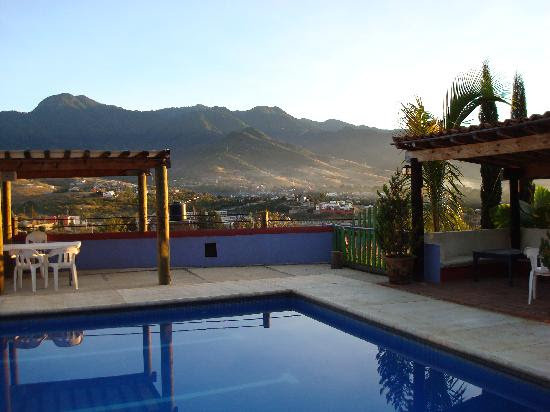 Thanks for your email.

On the 5th, 6th and 7th of May, we will visit most (or all) of the following historic (and pre-historic) sites, led by our bilingual Oaxacan guide in the comfort of a private excursion bus.

1.) Monte Alban Archaeological Zone is a spectacular religious, political and residential center built on the top of a mountain whose peak was leveled -- without benefit of metal tools or beasts of burden -- in order to enable construction. 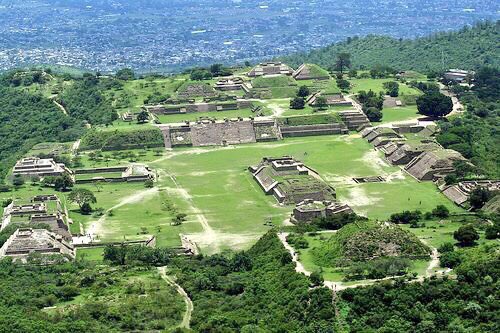 2.) We will observe Oaxaca's world-famous hand-made black pottery production, probably at the same workshop where Malia Obama visited during her recent Oaxaca trip.

3.) Hierve el Agua is one of the world's most stunning "soda bridge" formations with a breathtaking, cliffside swim site. 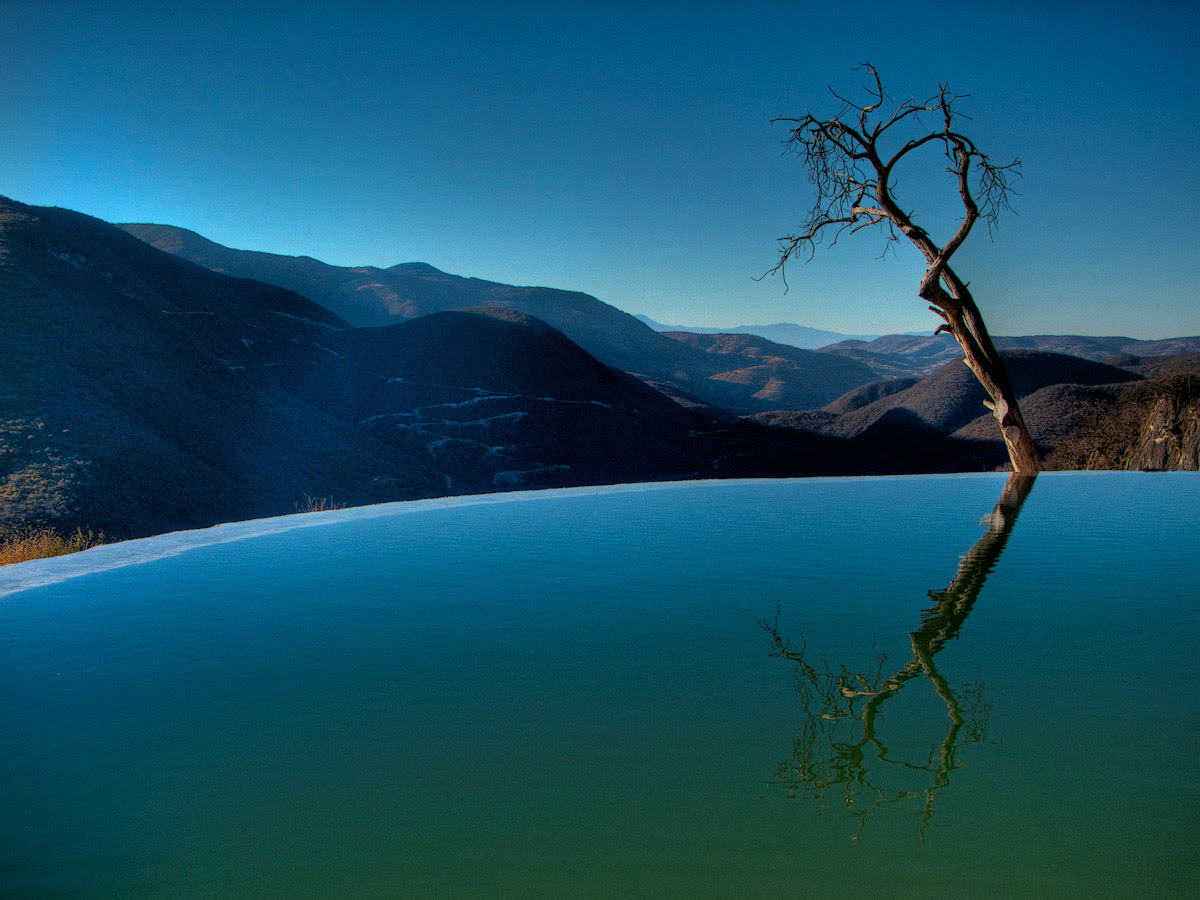 4.) We will visit an alebrije workshop, followed by a traditional Oaxacan buffet lunch  in a gorgeous hacienda setting. The huge selection of delectable dishes at Hacienda Culiapam includes all 7 Oaxacan moles.

The 7 Moles Of Oaxaca

It's not all chiles & chocolate in the land of mole

5.) We will visit the Mitla Archaeological Zone whose top-notch, low-cost handcraft market is right alongside. 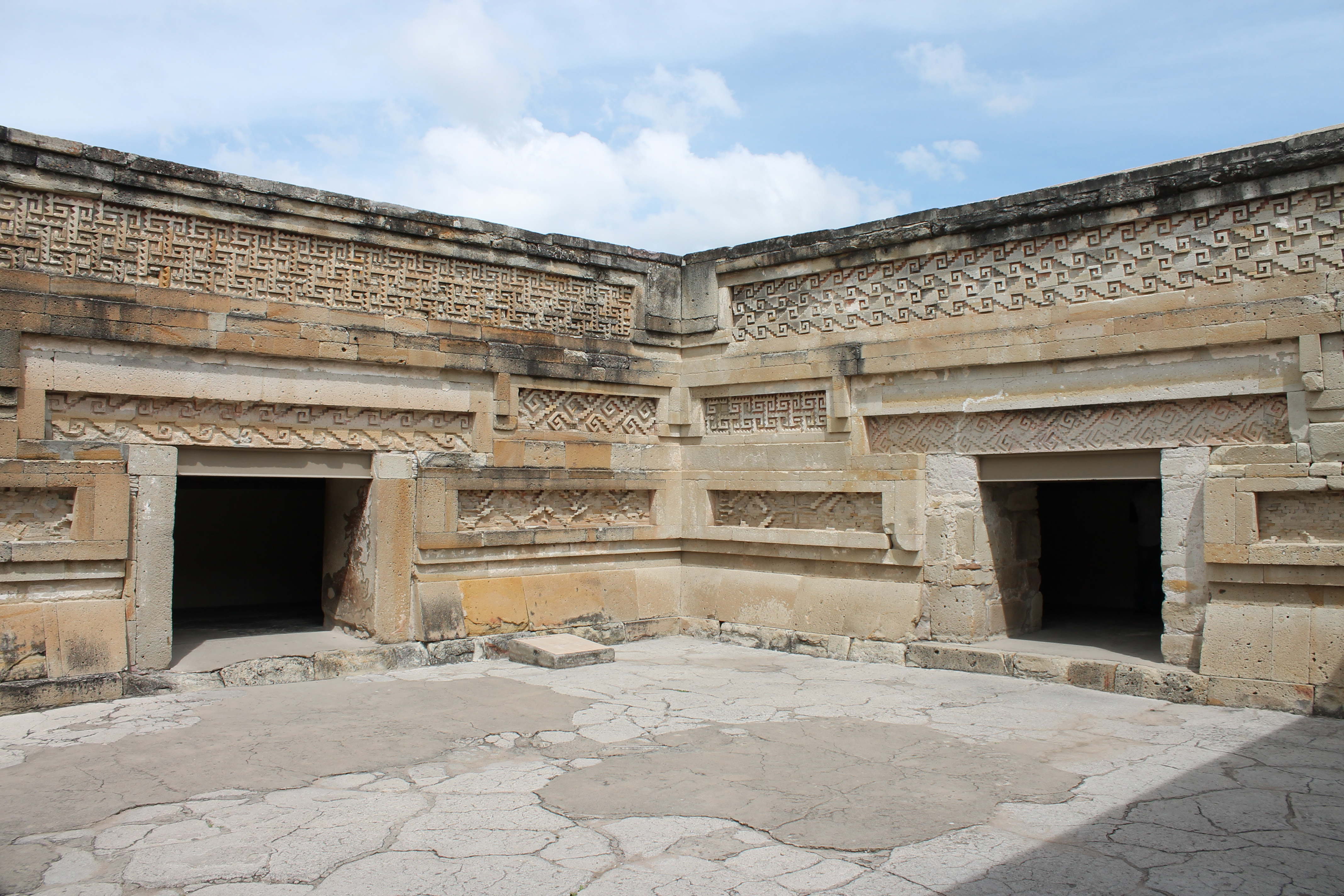 6.) The Tule Tree is the world's largest circumference tree.
I think it best if our expeditionaries do not have a preliminary idea of the immensity of The Tule Tree, and -- "to keep the secret" --I am not sending a photo.

7.) In Teotitlan del Valle, we will observe the entire weaving process starting with yarn-spinning and dye-stuff production, most notably the crimson red dye deriving from cochinilla, a pure white nopal cactus leaf parasite. 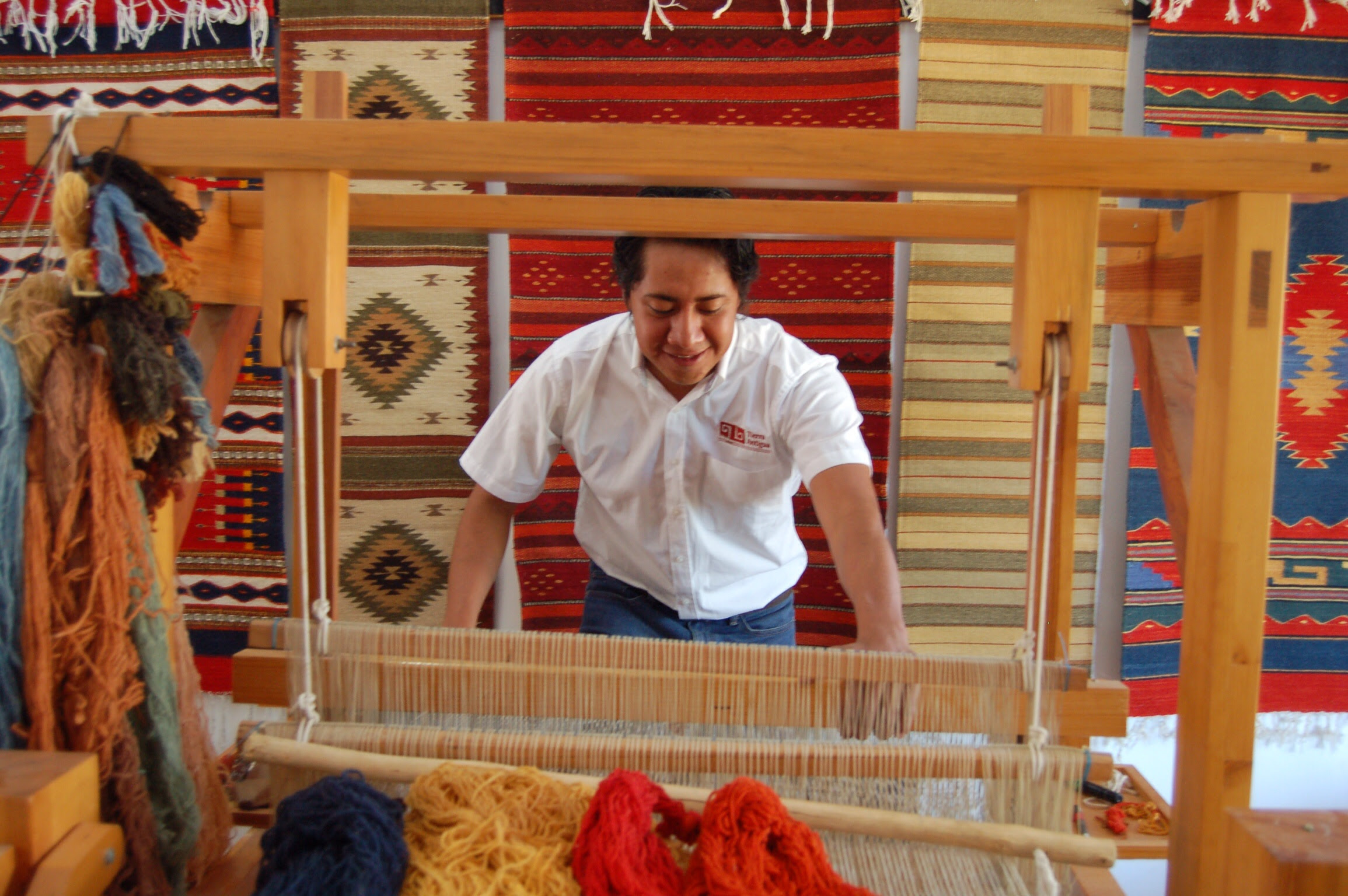 9.) Oaxaca's Historic District, including the delightful zócalo (central square), is a hotbed of artistic creativity. Chapulin Vendor
Grasshoppers marinated in salt and lime juice. This staple food (which I have come to enjoy) is available at every turn. It is said that eating just one "chapulin" ensures your return to Oaxaca.

12.) Every day we will spend some time in Oaxaca's Historic District, dining at two splendid downtown restaurants, La Toscana, which is set in a grand colonial home with fountain... and El Asador Vasco where our plaza-side perch along the spacious colonial balcony provides a marvelous view of the vibrant street scene -- usually to the sound of live music -- in the zócalo below.

Oaxaca is among the world's most renowned dance capitals.
17 Oaxacan tribes still speak their native languages and the resulting cultural diversity is a wonder to behold.

We may not have time to visit all of the places mentioned above but I will
do my best to maximize the cultural diversity of our excursions when I meet with our Oaxacan guide on April 28th.

Even if it proves necessary to bypass a couple of activities, our schedule will be packed with memorable and spectacular experiences.

I will also try to arrange a brief service project and, to this end, will visit the historic, childhood home of Mexico's most revered president, Benito Juarez, a "pen pal" of Abraham Lincoln. Juarez, who was as important in Mexican history as Lincoln was in American history, grew up an orphan-shepherd whose first language was Zapotec. I will learn if it is possible for our group to do perform some useful work at the rectory in downtown Oaxaca where Juarez was raised by a Catholic priest who taught him Spanish as a second language. 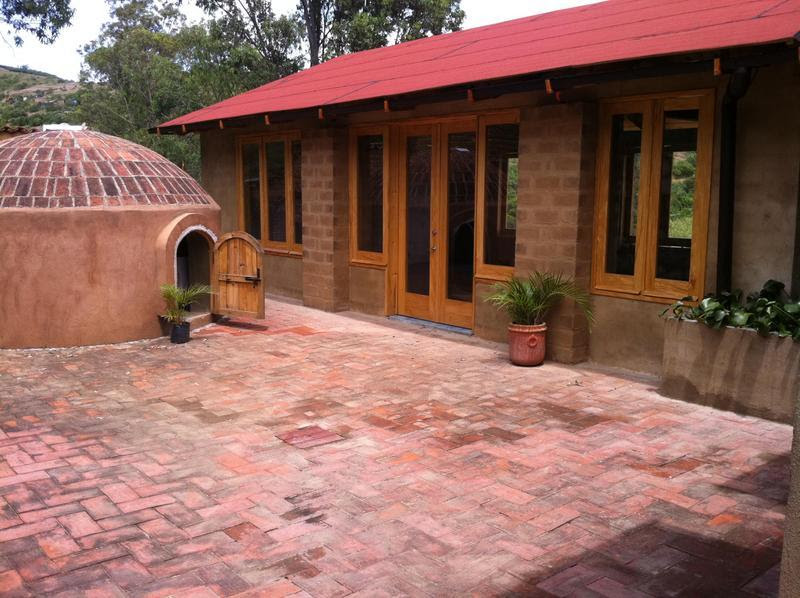 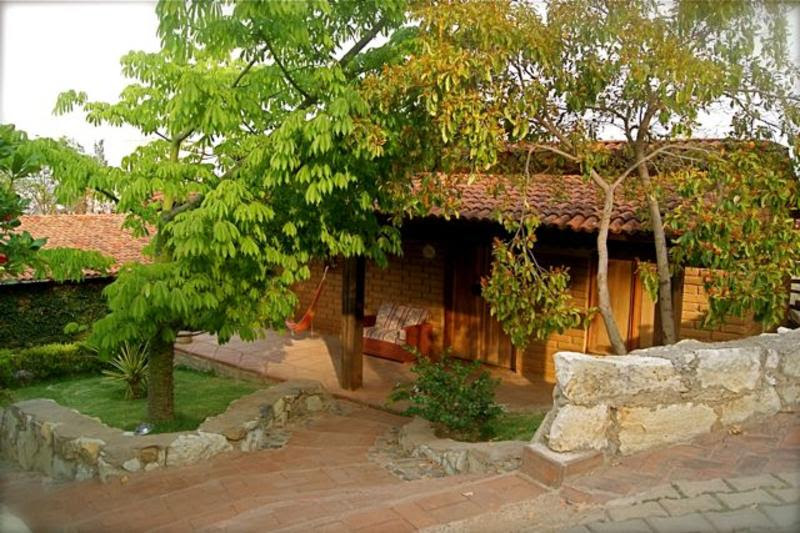 
Posted by Alan Archibald at 10:08 PM No comments:

"Two States In The Middle Of America: Illinois And Oklahoma"

Thanks for sending this new right-wing screed, strong on assertion, weak on Truth.

Here is a Wikipedia chart listing "murder and non-negligent manslaughter" rates for all U.S. cities with populations greater than 250,000. http://en.wikipedia.org/wiki/List_of_United_States_cities_by_crime_rate_(2012)

Check out Wikipedia's "Demographics Of New York City," a city where 36% of residents are foreign-borne and 25.1% are African-American, more than twice the national percentage. http://en.wikipedia.org/wiki/Demographics_of_New_York_City

For other statistical domains, here is an informative look at Oklahoma, a state that ranks 25th in overall tax burden and even lower on state budget deficit: http://www.statedatalab.org/state_data_and_comparisons/detail/oklahoma

I do not know if denial, dimwittedness or ignorance (in the original sense of "choosing to ignore") compels American conservatives to shun intelligent contextualization and the deepening of Truth that comes in tow.


In any event, Truth does not emerge from random assemblages of facts and assertions.

Not only are conservatives generally unable to think (a learned skill requiring time and effort), they are actually proud of their benightedness, a condition I call "Aggressive Ignorance."

The American Party: Know Nothing Nativism And Opposition To Catholic Immigration
http://paxonbothhouses.blogspot.com/2013/12/the-american-party-no-nothing-nativism.html

Speaking of deliberately "fractured truth" and how such "shards" get used to misrepresent the statistical "center" of factual truth, consider this "fragment."

Clearly, many cities with a high percentage of black residents have very high murder rates (although it is also true that American murder rates have been in free fall since the mid '90s).

It is also increasingly clear that America's grotesquely biased justice system has contrived to "felonize" young blacks, charging them at a rate 4 to 10 times higher than whites who are "taken to court" for the same crimes (most often possession of contraband or controlled substances) even though whites are significantly more likely to carry contraband than blacks.

Once young blacks have been criminalized -- often under identical circumstances that carry NO LEGAL RISK for adolescent whites -- life, forevermore, becomes Hell on Earth.

"Bad Black People." Why Bill O'Reilly Is Wrong Even When He's Right
http://paxonbothhouses.blogspot.com/2014/08/bad-black-people-why-bill-oreilly-is.html

The Future Of Race In America: TED Talk By Michelle Alexander, Author Of "The New Jim Crow"

The Caging Of America: Why Do We Lock Up So Many People?
http://paxonbothhouses.blogspot.com/2012/04/caging-of-america-why-do-we-lock-up-so.html

If you were black and found guilty of a felony at age 18, your life options would be so curtailed that circumstances would propel you to embark a life of crime, thus further worsening the overall statistics for "Bad Black People."

"Bad Black People." Why Bill O'Reilly Is Wrong Even When He's Right
http://paxonbothhouses.blogspot.com/2014/08/bad-black-people-why-bill-oreilly-is.html

Furthermore, as your involvement in crime deepened -- and even more doors slammed shut -- you would become ever more likely to use "The Equalizer" to "solve" the problems that are now shackled to your "ankles and wrists."

But rather than defend blacks, let's accept high kill rates in many of the cities (although far from all) that have a high percentage of black people.

Acknowledging that cities with many black residents are at risk of making the "Murder Charts," it is also true -- from sea to shining sea -- that the only solidly blue states among "The Top 21 States With The Highest Murder Rates" are Illinois and Michigan.

To be clear 19 of The Top 21 are either solidly red or trending red.

By every measure, The Bible Belt is a slimy, backward place, at least relative to states that are more blue.

"Republicans For Revolution," A Study In Anarchic Apocalypticism
http://paxonbothhouses.blogspot.com/2013/10/republicans-for-revolution-study-in.html

"Bank On It: The South Is Always Wrong"
http://paxonbothhouses.blogspot.com/2014/07/bank-on-it-south-is-always-wrong.html

"Why The Bible Belt Is Its Own Worst Enemy"

I can go deeper, but why bother.

"Conservative" Americans are not interested in inconvenient truths, the overwhelmingly majority of which are "stacked" against them.

America's right-wing has made deep denial its informing characteristic, a character trait on full frontal display when it comes to global warming.
"The Danger Of Science Denial"
TED Talk by Michael Specter
http://paxonbothhouses.blogspot.com/2013/03/ted-talk-danger-of-science-denial.html

It is not in the conservative playbook to contribute to understanding but rather to propagate misunderstanding for the sake of ideological advantage.
"The Hard, Central Truth Of Contemporary Conservatism"
http://paxonbothhouses.blogspot.com/2014/04/obamacare-and-hard-central-fact-of.html

In less than two months Pope Francis will issue his encyclical on the environment, emphasizing the disproportionate relationship between environmental degradation and degradation of The Poor.

Although Francis may - or may not - ascribe global warming to man-made causes, he will leave no doubt that human beings are responsible for living lightly-and-sustainably on the earth and that we are charged with serious moral obligation -- personally, locally, nationally and globally -- to stop behaving like consumerist boors.

The pope's bottom line will emphasize that "God is not taking out the garbage for us" and that it is our personal and collective political responsibility to stop living like pigs whose snouts continually slop at the capitalist trough.

My crystal ball tells me that Francis' encyclical will create a firestorm -- especially in conjunction with the pope's September talks at the United Nations and before Congress.

Most Americans, particularly conservative Christians, will rankle at 1.) the clear definition of humankind's moral responsibility for counteracting global warming, and 2.) the need for collective political action at the national and global level.

Catholics and Evangelical-Fundamentalists have participated in a bizarre alliance since the Reagan Administration and that alliance is about to end.

Human morality is no longer about the primacy of sex organs.

It is about "the works of mercy," including our merciful treatment of Mother Earth.

Despite wishful thinking by thoughtless "Christians," God is not taking out the garbage for us.

Dealing with "the garbage we create" is our job and it starts with less consumption -- "the little piggies" will not be happy -- and ends by ensuring the whole interactive panoply of green methods get used to minimize toxicity in the first place, and to maximize detoxification whenever detox is necessary.

My crystal ball also tells me that Pope Francis' upcoming encyclical -- a document that will describe how environmental degradation disproportionately ravages the poor -- will incite a hissy fit in make-believe Christians, Catholic bibliolaters and deep South bible bangers.

Bibliolatry... And How To Live Happily Ever After
http://paxonbothhouses.blogspot.com/2013/04/bibliolatry-and-how-to-live-happily.html

Biblical Literalists: Please Weigh In These Passages From Deuteronomy And Acts
http://paxonbothhouses.blogspot.com/2015/01/biblical-literalists-please-weigh-in-on.html

"Trial By Ordeal: Alive And Well Into The 17th Century"
http://paxonbothhouses.blogspot.com/2012/09/trial-by-ordeal-alive-and-well-in-17th.html

Time To Expunge Catholicism Of Traditions & Texts That Represent God As A Terrorist
http://paxonbothhouses.blogspot.com/2014/06/time-to-expunge-catholicism-of.html

"Is The Bible More Violent Than The Quran?"
http://paxonbothhouses.blogspot.com/2014/03/is-bible-more-violent-than-quran-npr.html

Most Christian conservatives will reject Francis' teaching on radical conservation and his exhortation for "sustainability politics" at every political level.

American conservatives -- Christian or otherwise -- are constitutionally unable to accept any moral mandate that requires greater attention to the environment than The Bedroom.

The firestorm Francis' encyclical will provoke (although slow to develop) will be so nasty that the reprehensible alliance between Catholics and Fundamentalist Protestants will finally rupture now that Francis is shining klieg lights on the fundamental, enduring difference between Catholic Communitarianism and Protestant Individualism.

In this values debate, Fundamentalist (and many Evangelical) Christians will reject all references to "collective political responsibility" because Fundamentalism is fundamentally invested in the irresponsible belief that God's providence will "take care" of every issue outside the purview of Individual Responsibility.

According to The Fundies, a Christian's sole -- and sola fide -- duty is to "come forward" at a revival meeting proclaiming: "Jesus Christ is my Lord and Savior!"

In effect, Fundamentalism believes that in relationship to "global systems" "God will take out the garbage" and that Christians' only responsibility is to tend their individual moral concerns, not those predicated on "structural immorality."

Scruplously focused on individual sin - particularly carnal sin - Catholicism has, until now, glossed over the structural sins which we approve and propagate by silent inattention.

Prototypal conservative Edmund Burke has a firm grip on the short hairs:
"All that is necessary for the triumph of evil is that good men do nothing."


Pope Francis: Moving The Moral Compass From The "Individual" Toward The "Collective"
http://paxonbothhouses.blogspot.com/2015/01/pope-francis-defends-himself-against.html

Pope Francis: One Of The Most Powerful Critiques Of Capitalism You Will Ever Read
http://paxonbothhouses.blogspot.com/2015/03/pope-francis-one-of-most-powerful.html

Bill McKibben: "The Christian paradox: How a faithful nation gets Jesus wrong."

As always, I encourage you to forward this essay to the email lists which circulated "Two States In The Middle Of America: Illinois And Oklahoma."

You never know when nominal "Christians" might repent their ingrained habit of shitting in the mouth of God-Truth.