Facebook Exchange With Xtian Fundie Friend About "Reality" And "Truth"

Yesterday at 12:18 PM ·
CNBC
·
Trump is too ill-informed to realize that China will come out of the Trade War even better off than before since tariffs oblige China -- whose economy is currently growing 3 times as fast as Uncle Sam's -- to focus on development of its domestic economy which is more profitable than its overseas trade. (Note that Chinese consumers number 1.4 billion, two times the number of people who live in the United States and the European Union combined.)
Meanwhile, diehard Trumpistas --...
See More

About this website
CNBC.COM
China will likely wait out the trade war as it bets on its own economy
Waiting out the trade war is the best option for China, while it boosts its economy which is largely driven by consumers — not trade, say analysts.
Posted by Alan Archibald at 10:24 PM 1 comment:

"Trump Is Such A Horrible Person His Karmic Punishment Will Be..." 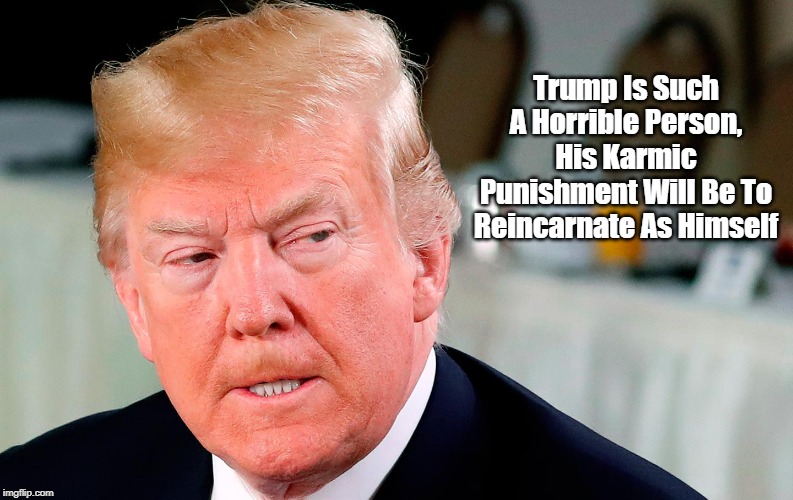 "The Case Of Al Franken," Jane Mayer, The New Yorker

The Case Of Al Franken
Jane Mayer
The New Yoker

Last month, in Minneapolis, I climbed the stairs of a row house to find Al Franken, Minnesota’s disgraced former senator, wandering around in jeans and stocking feet. It was a sunny day, but the shades were mostly drawn. Takeout containers of hummus and carrot sticks were set out on the kitchen table. His wife, Franni Bryson, was stuck in their apartment in Washington, D.C., with a cold, and he had evidently done the best he could to be hospitable. But the place felt like the kind of man cave where someone hides out from the world, which is more or less what Franken has been doing since he resigned, in December, 2017, amid accusations of sexual impropriety.
There had been occasional sightings of him: in Washington, people mentioned having glimpsed him riding the Metro or browsing alone in a bookstore; there was gossip that he had fallen into a depression, and had been seen in a fetal position on a friend’s couch. But Franken had experienced one of the most abrupt downfalls in recent political memory. He had been perhaps the most recognizable figure in the Senate, in part because he’d entered it as a celebrity: a best-selling author and a former writer and performer on “Saturday Night Live.” Now Franken was just one more face in a gallery of previously powerful men who had been brought down by the #MeToo movement, and whom no one wanted to hear from again. America had ghosted him.
Only two years ago, Franken was being talked up as a possible challenger to President Donald Trump in 2020. In Senate hearings, Franken had proved himself to be one of the most effective critics of the Trump Administration. His tough questioning of Jeff Sessions, Trump’s nominee for Attorney General, had led Sessions to recuse himself from the investigation into Russian influence in the 2016 election, and prompted the appointment of Robert Mueller as special counsel.
As it turns out, Franken’s only role in the 2020 Presidential campaign has been as a figure of controversy. On June 4th, Pete Buttigieg was widely criticized on social media for saying that he would not have pressured Franken to resign—as had virtually all his Democratic rivals who were then in the Senate—without first learning more about the alleged incidents. At the same time, the Presidential candidacy of Senator Kirsten Gillibrand has been plagued by questions about her role as the first of three dozen Democratic senators to demand Franken’s resignation. Gillibrand has cast herself as a feminist champion of “zero tolerance” toward sexual impropriety, but Democratic donors sympathetic to Franken have stunted her fund-raising and, Gillibrand says, tried to “intimidate” her “into silence.”
Franken’s fall was stunningly swift: he resigned only three weeks after Leeann Tweeden, a conservative talk-radio host, accused him of having forced an unwanted kiss on her during a 2006 U.S.O. tour. Seven more women followed with accusations against Franken; all of them centered on inappropriatetouches or kisses. Half the accusers’ names have still not become public. Although both Franken and Tweeden called for an independent investigation into her charges, none took place. This reticence reflects the cultural moment: in an era when women’s accusations of sexual discrimination and harassment are finally being taken seriously, after years of belittlement and dismissal, some see it as offensive to subject accusers to scrutiny. “Believe Women” has become a credo of the #MeToo movement.
At his house, Franken said he understood that, in such an atmosphere, the public might not be eager to hear his grievances. Holding his head in his hands, he said, “I don’t think people who have been sexually assaulted, and those kinds of things, want to hear from people who have been #MeToo’d that they’re victims.” Yet, he added, being on the losing side of the #MeToo movement, which he fervently supports, has led him to spend time thinking about such matters as due process, proportionality of punishment, and the consequences of Internet-fuelled outrage. He told me that his therapist had likened his experience to “what happens when primates are shunned and humiliated by the rest of the other primates.” Their reaction, Franken said, with a mirthless laugh, “is ‘I’m going to die alone in the jungle.’ ”
Now sixty-eight, Franken is short and sturdily built, with bristly gray hair, tortoiseshell glasses, and a wide, froglike mouth from which he tends to talk out of one corner. Despite his current isolation, Franken is recognized nearly everywhere he goes, and he often gets stopped on the street. “I can’t go anywhere without people reminding me of this, usually with some version of ‘You shouldn’t have resigned,’ ” Franken said. He appreciates the support, but such comments torment him about his departure from the Senate. He tends to respond curtly, “Yup.”

“What’s going on?” Franken said.
“It’s important,” Lomonaco said.
“But I want to vote,” Franken protested.
Lomonaco showed him the KABC-AM story and the photograph.
Oh, my God, my life! My life! was Franken’s first thought. He remembered the picture being taken, but he was stunned by Tweeden’s account. He had thought that they were on friendly terms. In 2009, she had attended a U.S.O. awards ceremony, in Washington, honoring him; photographs of the event capture them laughing together. He had no memory of her having balked at the kissing scene, and knew that he hadn’t written it for her. He had written it in 2003, and performed it on other U.S.O. tours before meeting her.
In Franken’s 2017 book, “Al Franken, Giant of the Senate,” which was published before Tweeden’s accusations, he writes of being preoccupied during the 2006 tour with deciding whether to run for public office. Others on the trip confirm this, recalling that he spent much of his downtime studying policy positions with an assistant, Andy Barr. Records show that Franken had already set up a political-action committee, and he announced his Senate bid soon after returning home.
Tweeden may well have felt harassed, and even violated, by Franken, but he insisted to me that her version of events is “just not true.” He confirmed that he had rehearsed the skit with her, noting, “You always rehearse.” The script, he recalled, called for a man to “surprise” a woman with a kiss, in a “sort of sudden” way, and though Tweeden had read the script, it’s possible that in the moment he startled her. Tweeden wasn’t an actress—before going into broadcasting, she had been a Frederick’s of Hollywood model—so she may have been unfamiliar with rehearsals. But Franken said, of Tweeden, “I don’t remember her being taken aback.” He adamantly denied having stuck his tongue in her mouth.
Franken’s longtime fund-raiser, A. J. Goodman, a former criminal-defense lawyer, told me that it was “easy to see how it could have grossed Tweeden out” to be kissed by Franken. At the time, Franken was fifty-five, and his clothes tended toward mom jeans and garish windbreakers. “He was like your uncle Morty,” Goodman recalled. “He wasn’t Cary Grant. But tongue down the throat? No. I’ve done hundreds of events with this guy. I’ve been on the road and on his book tours with him.” She said that Franken was “five hundred per cent devoted” to Bryson, his wife, whom he met during his freshman year at Harvard. “He can be a jerk, but he’s all about his family,” Goodman said. (Franken and Bryson have a daughter, a son, and four grandchildren.)
In Hollywood, Franken’s reputation had been far from wild. According to Doug Hill and Jeff Weingrad’s book, “Saturday Night,” when Franken worked on “S.N.L.” he was seen as a stickler and a “self-appointed hallway monitor” figure. James Downey, who spent decades writing for the show, told me, of Franken, “He’s lots of things, some delightful, some annoying. He can be very aggressive interpersonally. He can say mean things, or use other people as props. He can seem more confident that the audience will find him adorable than he ought to. His estimate of his charm can be overconfident. But I’ve known him for forty-seven years and he’s the very last person who would be a sexual harasser.”
As Franken absorbed Tweeden’s statement and the photograph, he realized that, given the recent rise of the #MeToo movement, “anyone who wanted to read the photo as confirming what I was accused of could do that. I understood that right away. And boom—I was instantly in shock.”
Franken wasn’t the only one. Two actresses who had performed the same role as Tweeden on earlier U.S.O. tours with him, Karri Turner and Traylor Portman, immediately recognized that Tweeden was wrong to say that Franken had written the part in order to kiss her. Both women told me that they fully supported the #MeToo movement and could speak only to their own experiences. But Turner confirmed that she had acted in the same skit in 2003. Video footage of her performing it, which can be seen online, shows that the script was altered for Tweeden only by cutting references to “JAG,” a TV show in which Turner starred. In a statement, Turner said that “no woman should have to deal with any type of harassment, ever!” But on her two U.S.O. tours with Franken, she said, “there was nothing inappropriate toward me,” adding, “I only experienced a person that was eager to make soldiers laugh.”
Traylor Portman, who used her maiden name, Traylor Howard, while appearing on the TV show “Monk,” said that she also played the role in Franken’s skit, in 2005. “It’s not accurate for her to say it was written for her,” Portman told me. She had rehearsed the kissing scene with Franken, and hadn’t objected, because “you’re going to practice—that’s what professionals do.” She said that the scene involved “what looked like kissing but wasn’t,” adding, “It’s just for comic relief. I guess you could turn your head, but whatever—it’s nothing. I was in sitcoms. You just play it for laughs.”
Portman went on, “I get the whole #MeToo thing, and a whole lot of horrible stuff has happened, and it needed to change. But that’s not what was happening here.” She added, “Franken is a good man. I remember him talking so sweetly and lovingly about his wife.” Portman recalled, “There were Dallas Cowboy cheerleaders there, and he didn’t pay any special attention to them. He had a good rapport with everyone. He was hilarious. He was just trying to get them to laugh. It was about entertaining people who were risking their lives.” Asked about the allegation that Franken drew “devil horns” on Tweeden’s head shot, Portman said, “It doesn’t sound out of line for him—but please. To get offended by that sounds ridiculous, like fourth grade.”

Posted by Alan Archibald at 11:30 AM No comments: