How did Jesus counsel his disciples to "gird themselves" for the world?
What exactly was his advice on "concealed carry?"

"Then Jesus went around teaching from village to village. 7Calling the Twelve to him, he began to send them out two by two and gave them authority over impure spirits. 8 These were his instructions: “Take nothing for the journey except a staff—no bread, no bag, no money in your belts.9Wear sandals but not an extra shirt. 10Whenever you enter a house, stay there until you leave that town. Gospel of Mark, Chapter 6

The Last Time Christians Had Balls They Believed In Martyrdomhttp://paxonbothhouses.blogspot.com/2012/08/the-last-time-christians-had-balls-they.html

Evangelicals LOVE Donald Trump:
We Are Known By The Company We Keep
http://paxonbothhouses.blogspot.com/2015/08/evangelicals-love-donald-trump-how.html

Donald Trump: The Paranoid Style In American Politics
And The Ongoing Festival Of Hatred
http://paxonbothhouses.blogspot.com/2015/11/donald-trump-paranoid-style-in-american.html

Jan. 30, 2016
Donald Trump settled into the gray armchair on the theater’s stage, leaning forward and praising his co-headliner Jerry Falwell Jr., the leader of the nation’s largest Christian university.
On a sleepy Saturday night in eastern Iowa, the pair talked about the manufacturing scene in Newton, Iowa, and the mullahs of Iran. Under crimson velvet curtains, they compared views on Saudi Arabia’s national defense and South Korea’s robust television makers.
That’s right. Here is the thrice-married New York billionaire, sharing the stage with the scion of one of the Christian Right’s leading families, during the final hours of a race in Iowa that is still uncertain. On stage, they exchanged pleasantries and praise, betraying no uneasiness between two men who live quite different lives.
"We need someone other than a career politician,” said Falwell, the leader of the Christian university founded by his father.
To some, it might reek of opportunism, but The Donald has never been one to show shame. Asked earlier in the campaign what he asks God for forgiveness, Trump professed that he had never done it. “I think if I do something wrong, I think, I just try and make it right. I don’t bring God into that picture,” Trump said. He also seemed to make light of the sacrament of Communion with references to eating “my little cracker” and drinking “my little wine.”
Falwell, whose college hosts mandatory worship services for students and is a frequent stop for Republicans, says he understands how some look at his endorsement with some skepticism given Trump’s previous support for same-sex marriage and abortion rights and his marital history.
“It’s just like when you have a sick child. You look for the best doctor you can find. It may not be a doctor who goes to your church but it’s the one who has best experience with that particular illness,” Falwell said. “We need a businessman.”
Read More: Why Trump Is Winning Over Christian Conservatives

"Listen kid... Don't even think about winging him.
The sweet spot is right between the eyes."

"Are Republicans Insane?" Best Pax Posts
http://paxonbothhouses.blogspot.com/2014/12/are-republicans-insane-best-pax-posts.html
He likened it to his father’s endorsement of Ronald Reagan, “a Hollywood actor who had been divorced and remarried” over Sunday school teacher Jimmy Carter. “Jimmy Carter was a great Sunday school teacher. But look at how he was as President,” Falwell said.
“He was a great gentleman,” Trump said of the elder Falwell. “He says I remind him of his father. That’s the best compliment.”
Falwell’s character testimony, however, was a reminder of the chasm between Trump and these Iowans. When Trump’s limo broke down in rural New York and a couple helped him get home, Trump paid off their mortgage, Falwell said. Or when he saw that a Maytag plant in Newton, Iowa, was closing, “his hotels in Chicago bought supplies from those businesses to keep those businesses in business.” He let people sleep in the lobbies of his buildings during other New York catastrophes.
“He doesn’t brag,” Falwell said to laughter. “Well, he doesn’t brag about the types of things I’m going to talk about.”
Yet Trump is out of time, and if he is to win he knows he needs to win over the religious corner of the GOP if he is to win in Iowa.
Iowans are a faithful lot, and likely Republican caucus-goers are among the most faithful. Some 47% of likely Republican caucusgoers self-identify as Evangelical or born-again Christians, according to a Des MoinesRegister/Bloomberg Politics poll released just 48 hours before the contest. The same poll found 56% of those religious voters have a negative opinion of Trump.
Trump wrongly claimed Saturday night that Falwell’s support helped him take the lead among Evangelicals in that Iowa poll. Among Evangelicals, Cruz was ahead with 33% support to Trump’s 19%. Trump remained on top overall, however.
Read More: Trump, Clinton Lead in Final Iowa Poll
“I was doing really nice with the Evangelicals. Now, I’m leading with them,” Trump said.
Not quite. But he’s trying to make that reality with ads he is running on Christian radio touting the Falwell endorsement.
He’s hardly alone on those airwaves. Indeed, a holy war of political ads is being fought on Christian radio, as well as talk and country stations. One nasty ad says Cruz cannot be trusted to lead the fight against gay marriage because he was ambivalent about it when meeting with donors in New York. “He doesn’t tithe?” one woman asks a friend in a different part of the ad. “A millionaire that brags about his faith all the time.”
Read More: Inside the Political Ad War You Haven’t Heard About
Another ad praises Huckabee for his convictions and “strength and moral clarity in challenging times to fall to his knees and seek wisdom and counsel from God.” And backers of Carson have been running ads focused on his own faith.
These religious voters have upended the race before. Four years ago, Christian conservatives helped Rick Santorum eek out a narrow win in Iowa. Eight years ago, former Southern Baptist pastor Mike Huckabee harnessed their clout to break records.
These voters also were roadblocks for both of Mitt Romney’s bids for President as some Christian conservatives were deeply mistrustful of Romney’s Mormon faith.
Trump was trying to be on those voters’ good side. “You have broken all the rules,” Falwell said. The prayers now are that Trump can turn a polling advantage and indifference to tradition into wins. 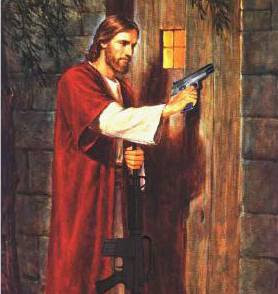 Mormon "prophet" Joseph Smith's last act on earth was to fire his "pepperbox" pistol, blindly, into a crowd.

Jesus open carries.
Why not me?

Posted by Alan Archibald at 3:47 PM No comments:

Marco Rubio Does 180 On Immigration: Not Only "Sees" Trump But Raises The Ante"


http://paxonbothhouses.blogspot.com/2016/01/rubio-changes-position-on-immigration.html
Will Marco Rubio win the Republican nomination?
Philip Bump, Washington Post
This look at Florida Sen. Marco Rubio's chances and path to win the Republican presidential nomination is part of a series here on The Fix looking at all the top candidates. To see the others, click here.
Where does he stand in the polls?
There's an old joke from horse racing about Secretariat being in first place, daylight placing second and the next horse in third. That's where Rubio is right now: In fourth place nationally behind Donald Trump, Ted Cruz and a lot of daylight.
Rubio's been running an odd campaign, focused more on his national presence than in any of the early states. He's visited Iowa far less than many of his competitors, for example, which runs contrary to how campaigns have been won in the past.
Perhaps because of that, his polling in Iowa and New Hampshire hasmirrored his national polling much more closely than other candidates -- which, at this point, is helpful. With the strength of the outsider candidates in the Republican field and the collapse of Jeb Bush, Rubio has been able to consolidate more support from those looking for a non-Donald-Trump candidate. Right now, for example, he's in third in Iowa and climbing.

How has he performed?
Fine. He's capable, compelling, a decent campaigner and a pretty good debater, and his TV spots have been generally good.
But political watchers would be excused for expecting more. The candidate whose watchword is his youth and vitality has not brought a lot of that to the trail.
What are his strengths?
Rubio's main strength is that he is a candidate who is more than palatable to moderate and establishment Republicans while not being unacceptable to the conservative base. There hasn't been much oxygen for anyone besides Trump so far, and less still for anyone unwilling to try to push politics-as-usual in front of a bus.
Simply appearing to be the main contender for the moderate vote -- slipping past Jeb Bush's awkwardness and John Kasich's anonymity -- may end up being hugely advantageous if the race comes down to one candidate who's an outsider and one who isn't.
What's more, he has a compelling life story and the ability to tell it. He's naturally likable in the way that Bush, for example, isn't. That's not the most important criterion for being president, but it's an important one for runningfor the job.
What are his weaknesses?
Rubio doesn't seem to be running very hard. While most people probably don't care much that he's missed a large number of Senate votes as he's been campaigning, Rubio's campaign has also been criticized for its relative nonchalance. This may be a gamble that early-state visits don't mean much, which -- given that Rick Santorum has barnstormed Iowa and earned a spot at the bottom of the polls -- may be correct.
Part of that may be that his campaign is not raising as much money as many of his competitors. In the third quarter of 2015, he raised $5.7 million -- to Ted Cruz's $12.2 million, Bush's $13.3 million and Ben Carson's $20.8 million.
It's also hard to gauge the extent to which his involvement in the 2013 comprehensive immigration reform package will be a liability. Immigration has been central to the 2016 debate, thanks to Donald Trump's bear hug of it. Rubio has been hit on it repeatedly, but it could become more of a problem as the race narrows.
What would it take for him to win the nomination?
Patience.
Rubio's best bet is to wait out the winnowing of the field, to be the last acceptable candidate standing in the rubble of the Republican establishment. If he remains viable as other more moderate candidates like Bush and Kasich drop out, he could conceivably consolidate their support -- perhaps even benefiting from Trump and Cruz splitting the anti-establishment vote as the race slogs on.
But at this point, adding up Rubio's, Bush's, Chris Christie's and John Kasich's national support gets you 27 percent -- still nine points behind Donald Trump and less than half of Trump and Cruz combined.
His campaign is talking about gradual growth in support over the short term, hoping for a third-place finish in Iowa, followed by second in New Hampshire and first in South Carolina -- proceeding from there to roll up victories and strong finishes as the non-outsider pick.
Third in Iowa seems like it's the likeliest outcome. From there? We shall see.

Philip Bump writes about politics for The Fix. He is based in New York City

Posted by Alan Archibald at 2:02 PM No comments:

TED Radio Hour: How To Prepare For A Graceful Death

Alan: In this episode of TED Radio Hour, I recommend the last two talks.

The third talk seemed to have little value.

It's hard to accept that everyone eventually dies. How can we better understand death as a part of life? In this episode, TED speakers contemplate the end of life with wisdom and humor.
Listen to Full Show

Candy Chang: What Do You Want To Do Before You Die?

Amanda Bennett: Do We Need A New Narrative For Death?

Jae Rhim Lee: Is There A Better Way To Be Buried?

Matthew O'Reilly: Is Honesty The Best Policy When Someone Is Dying?

BJ Miller: How Can We Prepare For A Graceful Death?

Posted by Alan Archibald at 11:02 AM No comments: