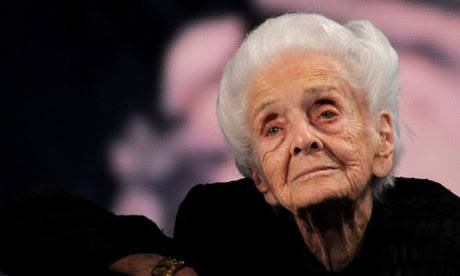 Rita Levi-Montalcini, pictured here during a 2005 appearance on Italian television. Photograph: Morena Brengola/Getty Images
Italy mourns loss of Jewish scientist who worked undercover under the fascists and won the Nobel prize for medicine in 1986


Rita Levi-Montalcini, a biologist who conducted underground research in defiance of fascist persecution and won a Nobel prize for helping to unlock the mysteries of the cell, has died at her home in Rome. She was 103.
The mayor of Rome, Gianni Alemanno, said her death was a great loss "for all of humanity", adding she represented "civic conscience, culture and the spirit of research of our time".
Italy's so-called Lady of the Cells was a Jew who lived through anti-Semitic discrimination and the Nazi invasion and became one of her country's leading scientists. She shared the Nobel prize for medicine in 1986 with US biochemist Stanley Cohen for groundbreaking research . In 2001 Italy made her a senator for life.
Levi-Montalcini kept up an intensive work schedule well into old age. "At 100, I have a mind that is superior – thanks to experience – than when I was 20," she said in 2009.
Her niece, Piera Levi-Montalcini, who is a city councillor in Turin, said: "A beacon of life is extinguished."Levi-Montalcini was born in Turin on 22 April 22 1909. At the age of 20 she overcame her father's objections to women studying and obtained a degree in medicine and surgery from Turin University in 1936.
She studied under top anatomist Giuseppe Levi, whom she often credited for her own successAfter graduating, she began working as a research assistant in neurobiology but lost her job in 1938 when Italy's Fascist regime passed laws barring Jews from universities and major professions.
Her family decided to stay in Italy and, as the second world war neared, she set up a makeshift lab in her bedroom where she began studying the development of chicken embryos, which would later lead to her major discovery of mechanisms that regulate cell and organ growth.
As eggs became scarce during the war, she cycled around the countryside to buy them from farmers. She was soon joined in her secret research by Levi, her university mentor, who was also Jewish and became her assistant.The German invasion of Italy in 1943 forced the family to flee to Florence and live underground. After the the city was liberated, Levi-Montalcini worked as a doctor at a refugee centre, and in 1947 she was invited to the US, where she remained for more than 20 years.
During her research at Washington University in St Louis she discovered nerve growth factor, the first substance known to regulate cell growth. She showed that when tumours from mice were transplanted into chicken embryos they induced rapid growth of the embryonic nervous system. She concluded that the tumour released a factor promoting nerve growth that affected certain cell types.
Her research increased the understanding of many conditions, including tumours, developmental malformations and senile dementia. It also led to the discovery by Stanley Cohen of another substance, epidermal growth factor, which stimulates the proliferation of epithelial cells.
Levi-Montalcini returned to Italy to become the director of the laboratory of cell biology at the National Council of Scientific Research in Rome in 1969.
After retiring in the late 1970s, she continued to work as a guest professor and wrote several books to popularise science. She created the Levi-Montalcini Foundation to grant scholarships and promote education programmes worldwide, particularly for women in Africa.
She had no children and never married, fearing such ties would undercut her independence.
"I never had any hesitation or regrets in this sense," she said in a 2006 interview. "My life has been enriched by excellent human relations, work and interests. I have never felt lonely."
Posted by Alan Archibald at 11:29 PM