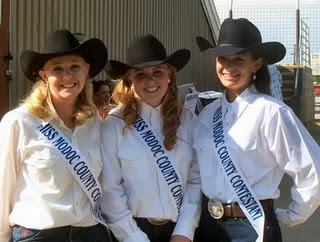 Remote Modoc County, the extreme northwest corner of California has around 10,000 people. Most of it is ghost towns and the 10,000 people living there make it the most Republican County in the Golden State. Not just Republican, a home for teabaggers, militia kooks, racists, conspiracists, Glenn Beck viewers and every kind of extremist you can think of. The last Democrat to win there was LBJ in 1964. It gave McCain his biggest California victory-- 67.9% (2,980 votes) and it is happy to boast the most extreme right wing lunatic fringe maniac in the state's congressional delegation, Tom McClintock, who replaced John Doolittle, after he was forced to resign for multiple criminal activities by him and his wife.

Modoc only has one city: Alturas, the county seat and there are around 3,000 people living there. And Modoc only has one hospital, which also happens to be the county's biggest employer. And there's a problem. Being Glenn Beck/Rush Limbaugh/Tom McClintock fanatics, many of the citizens don't believe in taxes. Like almost all Republicans, they're bums looking for a free ride. NPR focused on Modoc and it's about-to-be-shut-down hospital yesterday.


Residents in Modoc County, in the remote northeastern corner of California, will soon vote on whether to tax themselves to save their local hospital.

The county has gone broke trying to keep the hospital open, and a fractious debate has erupted in this proudly conservative frontier community over the best way forward... [T]he county hospital in Alturas-- even with its limited services-- is a lifeline to the people who live here. The closest full-service hospitals are hours away, and the nearby medical centers over the mountains are often unreachable during winter storms.

...The hospital is not just a lifeline-- it's an economic engine, even if it is just sputtering along. Like many rural hospitals, Modoc Medical Center is the largest employer in town, and people here worry what will happen if it closes.

"We'll be reduced probably to one grocery story, we'll probably lose a hardware store. We'll lose a lot of things, and a lot of people can't stay here," says Judy Mason, who is secretary of the Save Our Hospital committee. "Then you get a reduced value of properties, so now your tax base is smaller also. So the county becomes more impoverished simply because the tax base isn't there. So it's kind of a signpost: 'Ghost town this way.'"

County officials estimate the proposed parcel tax would generate $3 million a year. That's enough, they say, to keep the hospital afloat and even buy some new equipment. Still, there's strong opposition to the tax measure.

Doug Knox retired with his wife to a small ranch outside of Alturas. His driveway is lined with American and Confederate flags, and he is single-handedly leading the opposition to the parcel tax with radio and television ads.

"If it costs me $10,000 to $15,000, I'm willing to do it," Knox says. "Because I do not believe that throwing money at a problem is the way to go it, and put it on the backs of the taxpayers."
But even the staunchly conservative county supervisors-- who've come under fire for creating the crisis-- admit the parcel tax may be the only choice.


And the problem for normal people is that if these fanatics bankrupt their county and they all have to move out, normal towns are going to get an influx of these freeloaders. Unless they all move to Idaho or Utah or Mississippi, where they'd feel right at home, those being among the worst freeloader states in the Union.
Posted by Alan Archibald at 1:39 PM