What Second Amendment Evangelists Fail To Understand About Their Opposition
http://paxonbothhouses.blogspot.com/2015/10/what-second-amendment-evangelists-dont.html

"The Only Thing That Stops A Bad Guy With A Gun Is A Good Guy With A Gun"
http://paxonbothhouses.blogspot.com/2015/11/the-only-thing-that-stops-bad-guy-with.html

The Number Of People Who Use Guns In Self-Defense Is Negligible
http://paxonbothhouses.blogspot.com/2015/10/the-number-of-people-who-use-gun-in.html

Handguns At Home And The Scourge Of Suicide Among Young People
http://paxonbothhouses.blogspot.com/2015/01/handguns-at-home-and-scourge-of-suicide.html


One Heartbroken Mother's Plea To Other Parents: Ask If There's A Gun In The House
http://paxonbothhouses.blogspot.com/2014/06/one-heartbroken-mothers-plea-to-other.html

80% Of All Firearm Deaths In 23 Industrialized Countries Occurred In The U.S.
http://paxonbothhouses.blogspot.com/2012/07/80percent-of-all-firearms-deaths-in-23.html

The Key Question
If ever more guns make America safer,
why are we not already the safest country in the the world?
Instead, we are the most dangerous "developed" nation on earth.

Please email your answer to:
alanarchibaldo@gmail.com

If you do not have an answer, ask yourself, "Why not?"

Father surrenders after fatally shooting his infant son while aiming at his wife, police say Diata Crockett. (St. Louis Metropolitan Police Department)
Following an overnight manhunt, authorities in Missouri have detained a convicted felon who is accused of drawing a gun on his wife, pulling the trigger and accidentally killing his 8-month-old son.
Police said Diata Crockett shot the couple’s son Reign during a domestic dispute Tuesday, then fled with their two toddlers still in the car.
The two children were found later but Crockett was still missing.
“He’s armed, he’s considered dangerous, and he’s used violence not only today but in the past as well,” St. Louis Metropolitan Police Chief Sam Dotson said during a news conference Tuesday, according to NBC affiliate KSDK.
But hours later, on Wednesday morning, Crockett “turned himself in to his lawyer and is now in SLMPD custody,” police said in a statement.
“Thanks to everyone who assisted in ensuring the children’s safety and the apprehension of the suspect,” the statement said. “The investigation is ongoing.”
It was not immediately clear who Crockett’s attorney is.
[‘My sister shot herself’: 5-year-old dies playing with father’s unsecured handgun]
Police said Crockett drew a gun Tuesday afternoon while trying to persuade his wife, along with three of their six children, to get in the car in the couple’s St. Louis suburb.
Dotson, the police chief, said that at a stop near an exit ramp, the “mother decides this is her chance to get out of the vehicle” with her 8-month-old, Reign, in her arms.
Crockett fired one shot at her while she was exiting the vehicle and struck the infant instead, Dotson said.
The mother, who was “distraught,” flagged down a motorist, who let her and child get into the car and called 911 while rushing them to a hospital, Dotson said.
“You hear them say in the car that ‘he’s trying to run us off the road; he’s trying to cause an accident; he’s following us,’ ” the chief said, recounting what the Good Samaritan told the dispatcher.
The child was pronounced dead at the hospital, police said. It’s unclear whether Crockett followed them there.
[Their 6-year-old was killed with a neighbor’s gun. A court just decided how much his life was worth.]
“It’s tragic — any act of violence is tragic — but when an 8-month-old in his mother’s arms is targeted by a family member, or caught up in a family member’s crossfire, I really have to question the humanity of this individual,” Dotson told reporters, according to KSDK. “And that’s why I think it’s important that we bring him into custody as quickly as possible.”
Police put out an Amber Alert on Tuesday afternoon for 3-year-old Blaze and 2-year-old Ryker Crockett, who were found unharmed at a relative’s house in Bellefontaine Neighbors, according to reports.
The couple’s three other children were at daycare at the time, according to KSDK. All of the children have been turned over to a family member, police said.
CONTENT FROM SAMSUNGConnectivity for a smarter world

The Internet of Things (IoT) has the potential to solve our biggest global challenges and bring people everywhere a better quality of life.
The search for Crockett, who was believed to be armed, continued into the night. 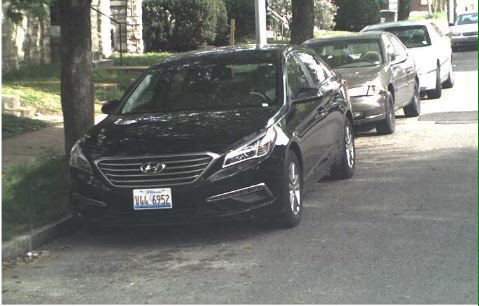 
Police said that the Hyundai Sonata he had been driving was found abandoned, and that Crockett was nowhere to be found.
Eventually, he surrendered.
Dotson said Crockett’s wife told authorities that her husband had made suicidal and homicidal threats in the past.
According to a report from the St. Louis Post-Dispatch:

Crockett pleaded guilty in 2006 of first-degree burglary, third-degree assault and property damage charges from August 2003 in St. Louis, and completed a year of probation.
He also pleaded guilty in 2011 to drug-related charges, unlawful use of a weapon, resisting arrest and forgery after St. Louis County police arrested him in September 2010. He was sentenced to five years in prison starting in May 2011.
According to court documents, a county officer saw Crockett put two large clear plastic bags containing about 400 grams of marijuana under the seat of the car. When officers tried to arrest him, he ran, and police had to chase him, according to the documents.
Officers found a loaded 9mm pistol in his waistband when he was arrested, and Crockett admitted he was a fugitive and had a probation warrant out for his arrest, according to the documents.
He signed another person’s name to the arrest sheet and gave police a false name, and admitted to police that he intended to sell the marijuana, according to the documents.

Morning Mix newsletter
Stories that will be the talk of the morning.
[Father ‘recklessly’ waving gun fatally shot his 4-year-old in the head, police say]
During a news conference Tuesday, Dotson spoke about Missouri’s gun laws.
“I think there are questions we always have to ask about violence and the availability of guns and how desensitized some people have become,” he told reporters. “Whether you’re shooing at the mother or the child in this, neither are appropriate. The father — who has a gun, who has a criminal history, who’s known to law enforcement — still has a gun and is willing to use it against his own family.
“That, I think, makes a serious statement about him.”
He added: “I continue to see situations in St. Louis where our officers risk their lives to go out and do their job every day to arrest people with guns, and we don’t see outcomes that make our community any safer.”

Posted by Alan Archibald at 1:27 PM