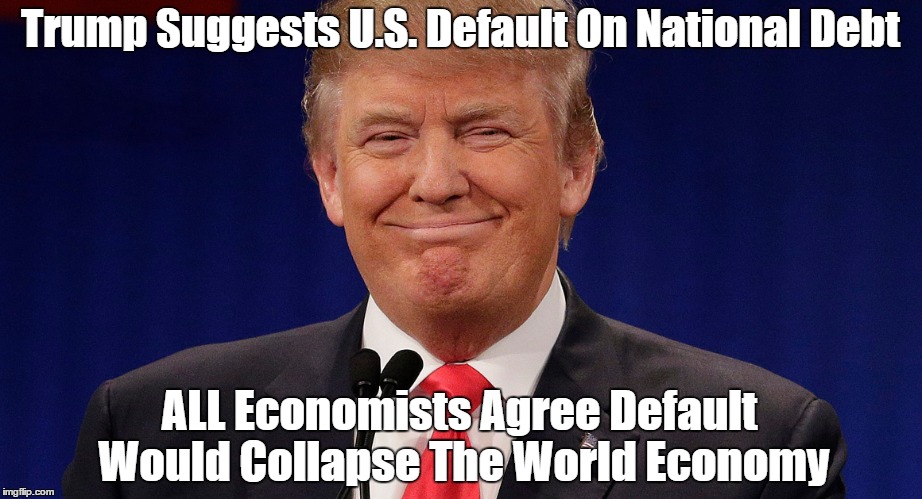 In new poll, support for Trump has plunged, giving Clinton a double-digit lead
By Scott Clement and Philip Rucker June 26

Support for Donald Trump has plunged as he has alienated fellow Republicans and large majorities of voters overall in the course of a month of self-inflicted controversies, propelling Democrat Hillary Clinton to a double-digit lead nationally in a new Washington Post-ABC News poll.
The survey finds sweeping unease with the presumptive Republican nominee’s candidacy — from his incendiary rhetoric and values to his handling of both terrorism and his own business — foreshadowing that the November election could be a referendum on Trump more than anything else.
Roughly two in three Americans say they think Trump is unqualified to lead the nation; are anxious about the idea of him as president; believe his comments about women, minorities and Muslims show an unfair bias; and see his attacks on a federal judge because of his Mexican American heritage as racist.
A slimmer majority say they disapprove of the way Clinton has handled questions about her use of a personal email server while she was secretary of state, and half of Americans are anxious about the prospect of a Clinton presidency, underscoring the historic unpopularity of the two major-party candidates. [Democrats see danger signs in states where Clinton has not fully engaged]
In fact, so strong is many Americans’ opposition to Clinton and desire for a change in Washington that even some registering their disapproval of Trump say that as of now they feel compelled to vote for him.
Nevertheless, in a head-to-head general election matchup, Clinton leads Trump 51 percent to 39 percent among registered voters nationwide, the poll found. This is Clinton’s largest lead in Post-ABC polling since last fall and a dramatic reversal from last month’s survey, which found the nearly even, with Trump at 46 percent and Clinton at 44 percent.
[May poll: Election 2016 shapes up as a contest of negatives]
As the hard-fought general election gets underway, Trump’s political standing is on dangerous ground. Fifty-six percent of the public at large say the celebrity business mogul stands against their beliefs, while 64 percent say he does not have the necessary credentials to be president. Fifty-six percent feel strongly that he is unqualified.
Nearly one-third of Republicans and Republican-leaning independents say Trump is unqualified for office, and 18 percent say he does not represent their beliefs, exposing deep fissures in the GOP base as Trump struggles to unite conservatives going into next month’s national convention in Cleveland.
Then there are the Americans who plan to vote for him despite their disapproval. For instance, 18 percent of people who found Trump’s comments about the judge racist, 15 percent of those who think his comments generally are biased against women, minorities or Muslims, and 11 percent of those who think he is unqualified say they support Trump over Clinton. Trump enjoys a big lead with those who want a new direction for the country, 64 percent to Clinton’s 26 percent. After eight years of President Obama, a majority of Americans, 56 percent, say they want to elect a president who can set the nation in a new direction. Forty-seven percent say they feel so strongly.
The poll, conducted in the immediate aftermath of a massacre in Orlando that was perpetrated by a man who pledged allegiance to the Islamic State, showed Obama’s approval rating at 56 percent — its highest level in Post polling since May 2011, after the killing of Osama bin Laden.
Obama is more popular now than Republicans George W. Bush and George H.W. Bush in the waning months of their presidencies. Although Obama’s approval rating has not reached the level of former Democratic president Bill Clinton’s in 2000, his standing suggests that he could be a relatively effective surrogate for Hillary Clinton on the campaign trail.
The survey of 1,001 randomly selected adults found a slight uptick in the share of people who identify as Democrats, from 33 percent in May’s poll to 36 percent this month. Self-described Republicans accounted for 24 percent of those polled this month, ticking down from 25 percent in May, while independents made up 33 percent. This shift in party identification, however, accounts for less than half of Clinton’s gains in the new poll.
In May, Trump was more competitive with Clinton because he had just secured the Republican nomination and the party’s electorate was coalescing around his candidacy. Clinton’s unfavorable ratings among registered voters tied their record high last month, matching Trump’s at 57 percent and weighing her down.
But that dynamic reversed over the past month, with Democrats unifying behind Clinton and Republicans expressing fresh doubts about Trump. While 88 percent of Democrats or Democrat-leaning independents say they support Clinton, a smaller 79 percent of Republican-leaning voters back Trump.
And there is evidence in the poll that the emergence of Trump as the Republican Party’s standard bearer has pushed some GOP voters out of the fold. Just 69 percent of self-identified Republicans who supported a candidate other than Trump in the primary say they now support Trump; 13 percent say they back Clinton, while 11 percent volunteer “neither.”
There is also little evidence that Trump is winning over Democratic primary voters. On the campaign trail in recent weeks, Trump has made direct appeals to disaffected supporters of Sen. Bernie Sanders (I-Vt.). But the poll finds that just 8 percent of voters who backed Sanders in the primaries say they support Trump, down from 20 percent in May.
A 61 percent majority of all Americans say Clinton is qualified to serve, while Clinton maintains a 2-to-1 advantage on which candidate has the best personality and temperament to be president.
The poll finds that 66 percent saying Trump’s controversial comments about women, minorities and Muslims show an unfair bias; 68 percent say Trump’s criticisms of Judge Gonzalo Curiel were racist; and 85 percent say the comments were inappropriate.
Among Republicans and Republican-leaning independents, 36 percent say Trump’s comments show he is unfairly biased toward certain groups while 39 percent say the Curiel comments were racist and 71 percent say they were inappropriate.
With such broad public disapproval of Trump’s controversial comments, Republican elected officials have awkwardly tiptoed around their likely nominee. Trump has chastised fellow party leaders when they have distanced themselves or denounced his comments.
The poll found that 62 percent of Republicans or Republican-leaning independents want GOP leaders to speak out against Trump when they disagree with his views, while 35 percent think they should avoid criticizing him.
The June 12 shooting rampage at a gay nightclub in Orlando, which killed 49 people and the gunman, tested both Clinton and Trump, who took divergent approaches with their responses, both temperamentally and substantively.
[Trump pushes expanded ban on Muslims and other foreigners]
By a margin of 18 percentage points, more Americans say Clinton had the better overall response than Trump, though a significant share, 26 percent, had no preference. The survey found no increase in support for temporarily banning Muslims who are not U.S. citizens from entering the United States, one of Trump’s signature proposals. Forty-three percent of Americans support the Muslim ban while 52 percent oppose it.
Clinton’s support has risen significantly among male registered voters, jumping 11 percentage points since May to tie with Trump’s at 45 percent. Trump’s support fell by 11 percentage points among men overall and by 10 percentage points among white men specifically, a bloc with which he still enjoys a substantial advantage over Clinton.
Although Trump leads Clinton among white voters overall, 50 percent to 40 percent, he trails her badly among nonwhite voters, 77 percent to 15 percent. His is the smallest Republican advantage with whites for a Republican presidential candidate since 1996, when Bob Dole lost to Bill Clinton in a rout.
Clinton leads Trump among voters of all age groups, but the poll shows her with her greatest advantage, 54 percent to 34 percent, among those ages 18 to 39.
The Post-ABC poll was conducted June 20-23 among a random national sample of 1,001 adults reached on cellular and landline phones. The margin of sampling error for overall results is plus or minus 3.5 percentage points.

Posted by Alan Archibald at 6:21 PM